The last post was about Rav’s family and indirectly about Rav, who deserves his own post. We have pointed out already that, like R’ Simeon bar Yochai, we believed through Rav his lineage – as seen in the Talmud – was able to attain the status of a Lamed Vavnick. Rav (Abba Arika) was the first Amora in Babylonia (175-247) and thus very prominently quoted throughout the Talmud. 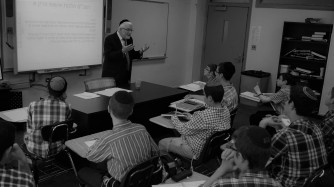 We have included him a Lamed Vavnick as explained in previous posts, but there were a few other texts to include that persuaded us to write exclusively about Rav. The first comes from a piece of Gemara in Nedarim:

R. Johanan said: The Holy One, blessed be He, causes His Divine Presence to rest only upon him who is strong, wealthy, wise and meek; and all these [qualifications] are deduced from Moses. Strong, for it is written, And he spread abroad the tent over the tabernacle; and a Master said, Moses our teacher spread it; and it is also written, Ten cubits shall be the length of the board. Yet perhaps it was long and thin? — But [it is derived] from this verse: And I took the two tables, and cast them out of my two hands, and broke them. Now, it was taught: The tables were six [handbreadths] in length, six in breadth, and three in thickness. Wealthy, [as it is written] Hew thee, [interpreted] the chips be thine. Wise: for Rav and Samuel both said, Fifty gates of understanding were created in the world, and all but one were given to Moses, for it is said, For thou hast made him [sc. Moses] a little lower than God. Meek, for it is written, Now the man Moses was very meek.

Rav comments on the portion from Nedarim, seemingly to know and agree with the attributes that describe Moses and giving just cause for the Divine Presence to rest upon him. Ironically, all of these characteristics (strong, wealthy, wise, and meek) were associated with Rav. We know he was wise from his respect obtained as the first Amora and wealthy from the text in Chullin that discusses his daughter’s marriage. He was meek, being submissive to the pleasures of the world and God. Finally, looking back to the text in which he reprimands Hanan, his son-in-law, it was for being weak emphasizing his own strength.
These characteristics of Moses were emulated by Rav himself. Rav knew what it meant to act like Moses, as we see from Nedarim and there is a spiritual connection to the “gates of understanding,” which hint at the powers of the 36. The text below from Shabbat 138b connects Rav and R’ Simeon bar Yochai.

‘[And one about] Torah’: for Rav said: The Torah is destined to be forgotten in Israel, because it is said, Then the Lord will make thy plagues wonderful: now, I do not know what this wonder is, but when it is said, Therefore, behold, I will proceed to do a wonderful work among this people, even a wonderful work and a wonder [and the wisdom of their wise men shall perish], it follows that this wonder refers to Torah…It was taught. R. Simeon b. Yohai said: Heaven forbid that the Torah be forgotten in Israel, for it is said, for it shall not be forgotten out of the mouths of their seed. Then how do I interpret, they shall run to and fro to seek the word of the Lord, and shall not find it? They will not find a clear halachah or a clear Mishnah in any place.

Both Rav and R’ Simeon bar Yochai are deeply concerned about the clarity of the word of God. Presumably because they were protectors of God’s words.
Jacob Neusner adds to Rav’s lore “The wisdom of the rabbis, like that of other religious-cultural leaders, included magical knowledge, how to bless and curse, how to heal and ensure one’s entry into heaven, how to read signs and omens and other aspects of the occult.” Rav seemingly was the most influential rabbi of his time and able to be a leader in the unbelievable and paired with his deep appreciation and dedication to God, Rav seemed to be a Lamed Vavnick much like R’ Simeon bar Yochai.

This is a text widget, which allows you to add text or HTML to your sidebar. You can use them to display text, links, images, HTML, or a combination of these. Edit them in the Widget section of the Customizer.